Somebody think of the children! How Adi Roche and the Chernobyl children project misrepresent science

Given the main point of this blog is to separate science from pseudoscience, I sometimes have to take unpopular positions; And today I feel it's vital to call Adi Roche and the Chernobyl Children's Project International out for misinforming the public. Adi Roche is the director and co-founder of the CCPI, and even ran for president of Ireland. She very nearly won it too, only allegations that she was a bully by former charity workers, including the co-founder sunk her bid. That is irrelevant here however - what concerns me is her and the CCPI's blatant disregard for science and flagrant misinformation. I've waxed lyrical before about radiophobia hysteria and radiation panic, both for The Journal and in regards to both Fukushima and Chernobyl on this blog before, so I'll endeavour to not repeat myself too much.

Adi Roche is an incredible self-publicist, and anything she says or does will get covered by the press. That may be a good thing for generating donations to her charity but seemingly not for public understanding of science - Just yesterday she visited Fukushima as an invited expert on radiation, and in what may be an  egregious abuse of the word expert, came out with her usual line:

"Japan is a global leader in technology and standards and yet even they have failed to deal with a nuclear reactor explosion. Nuclear energy is just not safe and one wonders how many horrors have to be inflicted on the world by it before governments accept this"
Oh dear. In an opportunistic display, Ms Roche manages to crassly manipulate a great natural disaster to further her own interests. First off, Fukushima was scheduled for decommission as it was over 40 years old. It was only designed to withstand a magnitude 7.9 earthquake and this was one of the reasons it was wound down. State of the art this was not. There was no nuclear explosion, nor could there ever be; there were in fact three partial core meltdowns. Ms Roche is conflating nuclear energy with nuclear weapons either out of genuine ignornance or more cynically, because it suits her to do so. In a rhetorical coup de grace she says nuclear power isn't safe and wrings her hand about the horror. Oh the horror! Yet this horror exists mainly in her imagination; nuclear is by far the safest form of power production with least amount of deaths attributable to it.

Seriously, think of this for one second - Ms Roche has been invited by a group of business men to Japan to tell them radiation is a horror. She tells them on the anniversary of a natural disaster that killed 20,000 + people to remember the 'disaster' at Fukushima - an event that claimed zero lives and is highly unlikely to do so ever. This galls me - she is exploiting suffering people to further her own agenda by conflating the staggering loss of life with the technical difficulties at Fukushima and I frankly find that abhorrent.  But the problem is deeper than just Ms Roche's remarks. Some of the statements the CCPI make are entirely and dangerously wrong. Here's some that raised alarm bells with me;
This would be terrible, if it were true. I've written in detail about the (surprisingly minor) health effects of Chernobyl before, and I don't want to repeat myself. So have the WHO and United Nations Scientific Committee on the Effects of Atomic Radiation (UNSCEAR) who release in depth studies on the effects of Chernobyl every five years. They have found zero increase in solid cancers, and zero increase in birth defects. Nilch. Nada. Zip. Thyroid cancer is more plausible as ingestion of radioiodine 131 can be absorbed by the thyroid but as I have discussed before, the ingestion would have to incur in high amounts within days of accident at the latest and even then is extremely treatable with a 98% 30 year survival. In any case, iodine 131 only has a half life of 8 days meaning its potential for long term damage is negligible, so only people alive at the disaster site could be affected. Indeed, this is seen on the curve for thyroid cancers below. Notice that the rates are returning to normal as you would expect. However, there is one extra credo - residents of Belarus became the most tested group for Thyroid cancer in the world, meaning that even without a nuclear incident many more cancers should have been detected. In any case, the CCPI figure is still wrong; a 2400% increase is not seen anywhere; the greatest increase is from 1 case in 100,000 to 11 cases in 100,000; a 1100% increase, which has since fallen. 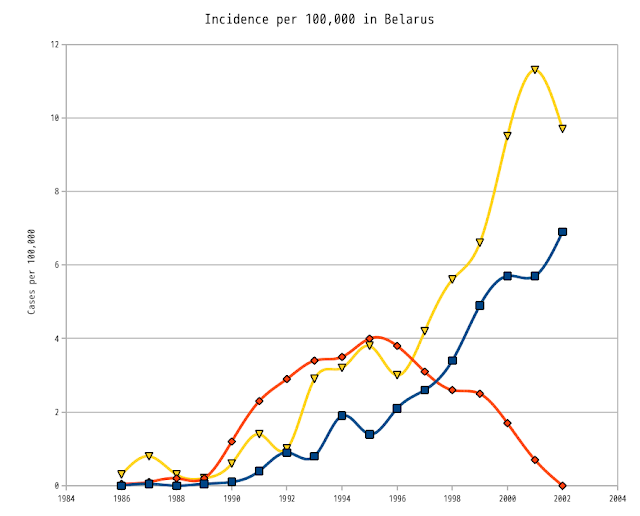 This could explain a lot - for starters, Vasily Nesterenko has been dead since 2008. I can only assume here that the CCPI are referring to his book "Chernobyl: consequences of the Catastrophe for the people and the environment" in which he and his co-authors claimed a figure of almost 1 million Chernobyl related deaths. However, the book has been scientifically debunked as little more than nonsense with dreadful methodology. In a particularly concise summation George Monbiot of the guardian wrote "A devastating review in the journal Radiation Protection Dosimetry points out that the book achieves this figure by the remarkable method of assuming that all increased deaths from a wide range of diseases – including many which have no known association with radiation – were caused by the Chernobyl accident. There is no basis for this assumption, not least because screening in many countries improved dramatically after the disaster and, since 1986, there have been massive changes in the former eastern bloc. The study makes no attempt to correlate exposure to radiation with the incidence of disease." I have discussed this in more detail before, but the important conclusion is that the CCPI are, despite their claims, not using the scientific method but instead relying on debunked accounts by fringe groups. Is this because they genuinely don't know the difference, or because the WHO and UNSCLEAR figures project a maximum of only 4000 life time cases of thyroid cancers ?

These are questions that unsettle me about the CCPI; are they unaware that the science they're spreading is simply wrong, or do they continue to use debunked data because it makes their cause seem more vital ? If it's the former this is utterly understandable, and I'd be glad assist them in correcting it. Helping people in need is a laudable goal, radiation threat or not. However, if it's the latter, this is simply misleading the very people who want to support them and serves only to muddy much needed discussion on nuclear power.

*Author Note: Please note, the aim of this post is not to attack the concept of helping children - my family took a Chernobyl child through CCPI for three years and only stopped due to personal misgivings about how things were run. My objection is rooted solely in correcting misinformation, accidental or otherwise.

What do you think? Have your say!