The Joys and Perils of Science outreach - picking one's battles

Tweet
Short thoughts on bad vaccine advice, science outreach and some dos and don't of engagement I've learnt through banging my head off a wall. This post is mainly on the question of when and where you should engage, and where one might be better cutting their losses. Apologies for brevity.

So yesterday, TV3 stooped even lower than they usually do and ran an absolutely appalling scaremongering documentary on the HPV vaccine, promoting claims it was damaging young women. It doesn't take much investigation to show that these claims are baseless, and it chimes in with a piece I'm currently writing on vaccination and ideology. In a nutshell, HPV is a huge life-saver, protecting people from cervical and penile cancer. It's been given to around 200 million people and has a tiny rate of complication, generally temporary soreness like any injection. The TV3 presentation was a complete quagmire of outlandish nonsense, and I put together a quick-fire status update on my facebook page after enduring the damned thing. The original post is below, with typos left intact...

Now, I usually keep my facebook page private for damn good reason (I do however have a public facebook and twitter, please feel free to get involved there), but after requests from friends and colleagues I allowed this post be shared. It has now been shared on twitter and facebook hundreds of times. Of course, this isn't the style I would write a piece in for a broadsheet or even a long form blog - this was a quick and dirty initial reaction to the sheer nonsense on display, with more emotive language than I might formally use. Most of the reaction has thus far been quite positive - a lot of people are angry at TV3, and a bigger contingent left worried. I've also been on Cork 96 FM this morning explaining the vaccine stats and re-iterating that there is no evidence to suggest Gardasil is dangerous.

I have also fielded dog's abuse from the usual suspects, but in my old-age I've been quick to use the block button. This is a function of both time and my personal investment, and something I'd like to expand on a little - in addition to my own research, I do try hard to do as much science outreach as I can. It can be a struggle for time, and I don't always get to do as much as I could like but in the last few months alone I've had pieces on in the Guardian, Irish Times and Sunday Business post on a array of topics, including GM food, false cures peddled to autistic children, Abortion myths, misconceptions about homosexuality, the ideomotor effect and dietary quackery (you can see some of them here if you're so inclined). I think it's important that scientists take a role in shaping public discourse, and try to champion the scientific method in lieu of baseless sound and fury. Sometimes, this is incredibly rewarding - a piece I write might, for example, help someone better understand a tricky subject or separate fact from fiction on a topic too often immersed in partisan narratives.

This can be great, and it's lovely to hear feedback when you've helped people parse a difficult issue, or corrected a very enduring misconception. But there is a crucial element that cannot be overlooked, and one that is relevant to any scientist who wishes to be involved with communicating science. This is the inescapable fact there are people who you cannot reach, and people who express an almost impressive resistance to reality. When I started science outreach, I was more than a little naive - I assumed, as many do, that misconceptions about science were borne of a lack of easily acceptable information. And to an extent this is true, but I had neglected to factor in a huge element - ideological bias. As I've written before on this blog, I was initially somewhat taken aback by how deeply invested people can be in their ideas - and totally immune to clarifying information.

As I'm now aware, one of the most common reactions such individuals employ to reduce the sense of cognitive dissonance when confronted with information contrary to their deeply held beliefs is a simple ad homimen reaction; personal abuse, coupled with threats and insults. Or, another perennial favourite, accusations of shilling for big pharma / big water / insert your own bogeyman here. It's predictable, tiring and still completely vapid yet happens with almost clockwork regularity when one dares to write about subjects people pin their ideology on, be it climate change, water fluoride or abortion myths. This is something I have a lot of first hand experience with -  as my regular readers (hi one person!) might be aware, I was honoured with the Maddox Prize last year largely due to the level of personal abuse I've encountered in trying to put forward science over noise. I've written a little about the role of ideology on that post too, but I'll try to keep everything required here.

Of course, not all negative comments are abusive. Some are just constant assertion, which when corrected leads to endlessly more assertion. There is a temptation to think that simply engaging with such people will somehow enlighten them, but this isn't an information deficit problem - this is an ideological problem that requires some psychology background rather than just logic to tackle. The common tropes you hear are almost archetypes at this stage: the militant "big pharma" conspiracy theorist, the Trojan horse anti-vaxxer declaring "I'm not anti-vaccine but..." before proceeding to aptly contradict their initial statement with an outlandish assertion, the concerned mothers who think the fact they have successfully spawned makes them an expert in immunology and the brilliant people who demand everyone else "does their research" while they openly ignore the scientific consensus.

Of course, when people do this, other posters will try and set their errors right. But then if then continue to keep posting something that is wholly wrong, even after clarification and correction, it's hardly surprising that others might lose their patience, and resort to sarcasm, ignorance, or even insults. But then some concerned science communicators might ask whether this drives the misguided deeper into the arms of dubious ideas? Should we engage one-on-one with people no matter how misguided they continue to be in the face of impartial information in the hope of changing their mind?

Sure - IF you have infinite time and enjoy banging your head off the wall. Because you'll get nowhere with it.

This isn't just cheap cynicism - in my experience, there is almost zero value in engaging with such people to any depth. When we do, we're pivoting on the assumption the problem is an information deficit or the claims are in good faith - this isn't usually the case. There's a good psychological reason to think this too. In 2007 Jacobson et al released an arresting paper with a hell of a title - you can read it here with paper access, but here's an abstract:


I shan't bore you with the details too much, but what Jacobson et al found was that logic flaws were so ingrained in this subculture that arguments rooted in logic completely failed to sway them. I've cited this paper before in a piece (one worth reading if you're interested, as it tackles a number of other misconceptions and flaws in anti-vax mentality), but here's the important sentence I used to distill the work of these authors:

"Research into the mindsets of anti-vaccination campaigners suggests that they tend to exhibit traits such as conspiratorial thinking, reasoning flaws, a reliance on anecdote over data and low cognitive complexity in thinking patterns."

But it's much, much worse than this - it's not just that explaining is a waste of time, there's a weird paradox where the more you try to explain the science to them or show how their reasoning is flawed, the more you will make them think they're right - that was the result of a large scale 2015 study and there's a nice motherjones.com article on it here. The highly depressing abstract is shown below: 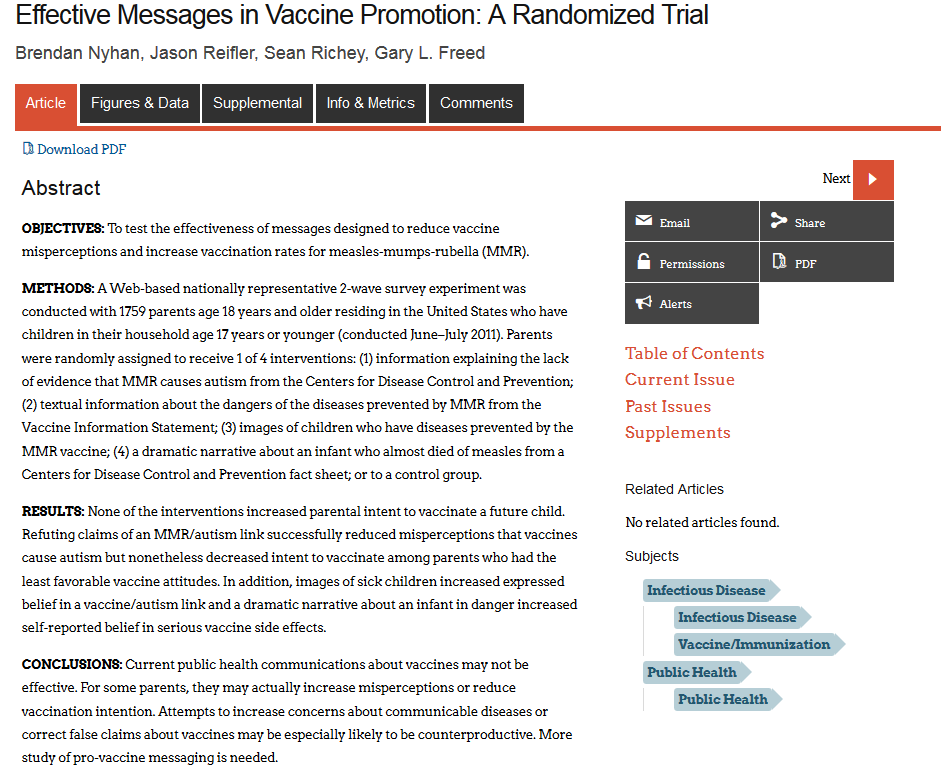 This is a depressing message, but one that gives us a more realistic picture - the people you argue with will, more than likely, never accept reality, not matter how hard you try to convey it to them. Well, we might then argue that there's no point in doing science outreach, but I would argue that's to misunderstand the state of play. The people that comment on articles and are dedicated enough to pick fights or make assertions represent a TINY fraction of all readers - estimates are at or below 1%. These people are then highly unlikely to be representative of the average readership, and are certainty not worth the time and energy to engage with.

So what can we do? I think realise that the audience who see our work is much greater than the audience who bother engaging with it. Our time is valuable, and so too is our mental health - when I write a piece for a broadsheet or do an explainer for BBC for whatever, it's worth my time as I know it will be will read by a wide cross section, and only a tiny fraction with a deep personal interest will bother commenting.

These days, I direct my focus at a media level - I try to hold media organisations accountable for bad science (looking at you, TV3) and work with the assumption that most people are relatively open minded and not too committed to a viewpoint, that the majority occupy the uncommitted middle ground. They might have heard some good and bad things about vaccination or climate-change, or GMO or whatever else - if I write a good piece, they'll take it on board and the next time it comes up they'll remember it. Devoted ideologues never will change their opinion, and it's just a complete waste of my energy to get in cyclic arguments with them. I don't enjoy it, and the pay-off is zero. Of course, if someone asks a good faith question, then it's well worth engaging and I often do in these instances, but I don't think we should feel any guilt if we dismiss petulant repeat offenders.

For me, it's a question of picking battles; I feel that the potential yield of swaying the deeply invested isn't worth the energy expended on them. I will never convince everybody, no matter how much I try - what matters is I can get the message across to a majority of people. Of course, I wouldn't ever presume to tell anyone what to do - if you feel you can get a point across and it's useful, then by all means continue. I can only say for me that I prefer we'd aim to shape the narrative with science before it becomes laden with nonsense and throws us on the back foot backing defence. I'd be curious on what others think, whether agreeing or disagreeing!

PS: I have loads of people adding me on Facebook and that's really quite nice, but I'd be really grateful if you could get me through the public page - I still update and check messages here, but I tend to keep the personal one locked down for family etc...

PPS: I don't mean to give the impression outreach is all hard slog - it can be extremely pleasant, and many people are grateful for assistance in grasping interesting but hard topics. I would hate to give the impression it's all nasty, because mostly it's not, even if people disagree. Yesterday, I was somewhat humbled by this honour from CR:UK for my outreach work, and it is really nice way of reminding me that it's not all angry ranting people all the time!