Brexit, immigration and the politics of hate

Some thoughts on the ugly tone of the Brexit referendum, and yesterday's horrific events. If you're looking for my more usual science-related rants, you'll find them at my Guardian profile here.

The deaths of people I don't know rarely impact me greatly; I tend to feel rather uncomfortable with the outpourings of grief over celebrity deaths and had come to think of myself as something of a cynic on that front. But I can admit to being wrong; yesterday's brutal murder of MP Jo Cox shook me far more than I could have ever expected. The day before last, I had watched this brilliant young parliamentarian on the Thames with her family, admirably challenging the scare-mongering of Farage's Flotilla with a more positive message. Yesterday's news was so jarring I had to double-take – indeed, I spent all night thinking about it. I won't repeat the tributes, for there are so many already and it is abundantly clear is that we have lost an incredible woman. I don't wish to politicise this tragic loss, but a politician being murdered for their political opinion whilst in the middle of a fractious political campaign has an inescapable political dimension. The plea by her husband Brendan to "fight against the hatred that killed her" has not left my head all morning. His observation is an apt one; the furore over next week's referendum has brought something ugly and xenophobic to the surface of public debate, something I never thought I'd see here.

This toxic fringe has become steadily emboldened by the vicious rhetoric of the previous few weeks. The leave campaign has pivoted entirely on a modern iteration of the big lie doctrine; that one can lie with audacity and impunity provided they lie with sufficient force and magnitude. Facts are irrelevant, reality is whatever they insist loudly and often enough. The Brexit figureheads are completely unperturbed that each of their campaign soundbites has been thoroughly debunked; their flagship claims on EU membership costs have been rebuked and exposed several times over, ignoring the fact that EU membership generates much more than that we pay in. But their true expertise is scaremongering on immigration statistics, exploiting fears of an England over-run.

This not only demonises immigrants, it conveniently misses the crucial point that EU migration is only a fraction of total, and that millions of UK citizens live in the EU under the reciprocal nature of the arrangement. Even the hope of magical favourable trade-deals in the wake of a Brexit is a fiction, scuppered by economists and American presidents alike. This isn't policy making; it's wishful thinking and collective insanity. The entire campaign has been a naked appeal to nationalism, and to a hazy memory of a Britain that never was. A disenfranchised crowd have been whipped into in a frenzy, convinced by these circus-masters that the European Union is the cause of all their ills. That this assertion is complete nonsense does not seem to be enough to stem such vitriol.

And if they were to be successful, would the UK become their promised land of milk and honey? When pushed, the Brexiters admit to having absolutely no idea what will happen, but still maintain it will be good. The world's economists and experts don't agree with their rosy forecast, baldly stating that a Brexit would be a self-inflicted wound on UK economic health. And it's not only trade that will suffer - UK science will be massively damaged. There is a damn good reason that scientists and all universities have been begging people to vote remain; science truly is international, and a Brexit would not only massively impact funding but would damage science hugely. My office here in Oxford is truly international, comprising of cancer researchers, physicists and biologists from all corners of Europe. Yet if Brexit passes, we are in limbo; and already, feeling hugely unwelcome, and understandably nervous about their future - there is no contingency. Prof. Stephen Hawking, a man not given to hyperbole, summed it up succulently when he said it would be a "disaster" for British Science.

Yet the Brexiters still proclaim everything will be better, whilst completely refusing to state how. In this regard, they exhibit the same lunacy and dead-eyed conviction of Free-men on the Land who defend themselves in court with nonsense about being sovereign citizens - and invariably seem surprised when they lose their case. Again, truth doesn't seem to enter into it. Obnoxious 'leave' leaflets have relied on nothing more than scaremongering, lying openly with claims Turkey and Syria are about to Enter the EU, amongst a host of other mistruths. But it doesn't seem to matter how much these lies are contested, or exposed - a surprisingly large contingent simply don't care.

And this is indicative of a deeper problem; people seemingly do not trust experts anymore. Instead, there is a seething resentment towards them. A worryingly large segment of the British public is woefully misinformed on the actual realities of the situation, yet still stand steadfast in their convictions. Moreover, those supporting Brexit are almost twice as likely to disbelieve the scientific consensus on climate-change, and actively distrust scientists and other experts. This contempt for evidence has made the Brexit masses immune to reality. Nigel Farage is the epitome of this; when asked why we was smoking again a few days ago, he airily dismissed decades of research and a mountain of incontrovertible evidence to declare doctors had "got it wrong" on smoking. This is wilful ignorance, coupled with contemptible arrogance but it speaks volumes about the mind-set that underpins such a man, and seemingly infects many others.

Nigel Farage is every inch a demagogue, and in this noxious contest there have been many of his ilk. They wilfully stoke the fires of discontent, fanning flames of hate, outrage and a particularly ugly strain of nationalism. His latest anti-immigration poster, unveiled yesterday, has rightfully been decried as horrendously racist, and deliberately reminiscent ofNazi propaganda. It's all characteristically wrong, supposed to imply migrants overwhelming Britain but is actually an image of refugees taken in Slovenia. It's yet another dishonest and deliberation conflation to drive outrage. This has been a hallmark of the leave Campaign, involving racist imagery and driving panic. Farage’s comments that “violence is the next step” have taken on a darker tone in this light.

Rather depressingly, it seems to have worked. Yet there are consequences for such behaviour; if one stirs up hatred as part of their political campaign, this all too often leads to terrible outcomes. As Alex Massie wrote eloquently yesterday, the demagogues of leave have blood on their hands in the wake of yesterday’s madness. So too do the vile red-top papers which have willingly buttressed an anti-immigration feel for years, and in doing so have painted targets on those that try to do any good. There's only so long you can scaremonger about breaking points and rising violence before it has a tangible and tragic impact we cannot deny.

We've become normalised to this puerile level of discussion; for decades, tabloids have run outlandish and easily debunked negative press stories on the EU, alternatively openly mocking it or blaming it. The tone of discussion towards Europe in the UK media has long been awful, dismissive and entirely wrong, and precious few who have defended this collective or countered the falsehoods dripped from the gutter-presses. Myths about bananas and cucumbers overshadow the force for good that EU has been; the incredible contribution to prosperity and human rights it has brought with it, equal pay for women, protection from discrimination, environmental regulations, common trade and travel and protections for workers and customers are distorted or ignored in favour of having an external flexible bogeyman upon whom all blame can be pinned.

But perhaps the greatest strength of the European Union is not merely economic; it is the sense of community and enduring the peace it has brought. We forget our history to our detriment; only a century ago, my grandfather* was shot on the first day of the Somme, the bloodiest day in British Military History. A year prior, he took a bullet at Gallipoli. He was one of those lucky enough to survive; in those four bloody years, millions died over a squabble between nation states, a glorified row between Queen Victoria's grandchildren. He fought too in the Second World War, where racist propaganda and hateful rhetoric led to the greatest loss of life ever seen in a conflict, and the attempted extermination of entire ethnic groups. We live in one of the few epochs in history where our Nation-states haven't been involved in bloody conflict, and instead are partners, friends and allies. Have we learnt nothing from the past century? Nationalism is a disease, rooted in delusion. We know all too well where petty-minded exceptionalism leads, and when we see the openly racist propaganda from leave campaign, we should remind ourselves where that culminates.

The truth of the matter is that this is a referendum of immense importance; it is not a general election where a poorly-performing party can be replaced a few years later. It is an unwavering and stern declaration with incredible consequences. And right now, there's a worrying change that either a poorly directed sense of anger or genuine apathy might lead to a deplorable outcome. But maybe this is a chance for a positive re-assessment; for decades Britain has stood on the fence, half-heartedly involved. But it needn't be this way; the UK is better in the EU, but so too is the EU the better for Britain. I would dearly love to see the UK remain, and become an active player in shaping the evolution of the union. The challenges we face as a species, from climate change to geo-political instability are too much for individual nations alone. We're stronger together, and we cannot allow ugly demagoguery carry the day - nor tolerate the violent xenophobia it encourages.

I've already cast my vote by post, as on polling day I'll be meeting with European collaborators for work on another international science project. I dearly hope that when I come to return, the UK has re-affirmed the strength of our united bonds, which I truly believe transcend narrow-minded nationalism. More than that, I can only hope that we do not succumb to the capricious demon of hatred and the empty promises of fools.

*Given I'm 31, most people think I mean great grandfather, but no - My grandfather was born in 1882, and a decorated war here for the Boer War, WW1 and WW2. He was in his late 70s when my mother was born. While he survived relatively intact, on his death-bed he was haunted by awful trench flashbacks, with visceral hallucinations of gas, shells and death. This was a chapter in the history of Europe we've long since forgotten, and one I dearly hope we never return to. 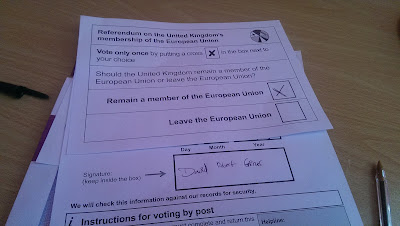